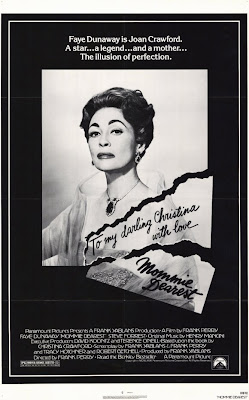 Mommie Dearest probably needs no introduction. It's a true camp classic, with one of the greatest over-the-top performances in movie history: Faye Dunaway as unhinged screen legend Joan Crawford is a sight to behold. It's the "true"? story of Christina Crawford, Joan's adopted daughter, who suffered a lifetime of verbal and psychological abuse by her crazy movie star mother. I'm sure there is actually a good deal of truth to the story, but the movie and its star are just so excessive that I can't imagine it played out like this in real life.

Even if you haven't seen Mommie Dearest before, scenes and lines have become part of pop culture. I'm sure we all know the "No More Wire Hangers" line, right? I feel kind of bad for Faye Dunaway, for being so ashamed of this role. It's a tour de force, whether she acknowledges it or not. She really transforms herself into Joan Crawford, and when Crawford goes crazy, Dunaway is hilariously and delightfully watchable. I know that's probably not what she intended to be, but we've seen Network, Chinatown, and Bonnie and Clyde, so we know Faye Dunaway can act. And act she does. And act and act and act. Nobody told her she was acting in a comedy.

Mommie Dearest is a rare instance of a studio putting a new spin on their marketing of a movie. When audiences at screenings laughed throughout, Paramount decided to sell it as high camp, and made a tidy profit on it. We all know that Dunaway wasn't happy. I wonder what director Frank Perry thought of it. I kind of get the sense that that was what he was going for all along, but who knows? There's a scene toward the end when 20-something Christina falls ill and her 60-year-old mother fills in for her on the soap opera she was acting on while she recovers. That's hilarious! And I felt like Frank Perry was aware of the humor of it all.

Regardless of whether it was meant to be funny or not, Mommie Dearest is one of the most insane movies ever made. Utterly tasteless, but undeniably watchable. Its cult status is well earned. 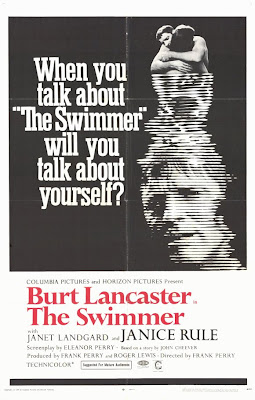 After seeing Mommie Dearest, I was curious about the work of Frank Perry, so I sought out his 1968 film, The Swimmer, adapted from a John Cheever short story. It's a surreal, allegorical tale about Ned (Burt Lancaster), a successful man who decides to swim home through all the swimming pools across the county. On his journey through his neighbors' backyards, Ned encounters many people from his past, and has discussions with them, where more and more about his own nature is revealed, before swimming through their pools and running to the next yard. As the movie progresses, we realize, along with Ned, that he isn't the happy, successful, pleasant man he at first seemed to be.

The Swimmer is very much a piece of late sixties weirdness. It hasn't endured or held up the same way a lot of the major movies from that time period have. It kind of shares some themes with The Graduate. Not only the whole swimming pool thing, but also the notion that our ideas of success and The American Dream have become rather hollow, an idea very much prevalent in the 1960's.

I found The Swimmer to be an interesting film, but not a great one. This may come as a surprise, but this movie by the director of Mommie Dearest is NOT the most subtle of allegories. Everything is really on-the-nose, and you feel like he is driving the point home by repeatedly punching your face with it. As the narrative progresses, Ned, having been swimming, running half naked through the woods, and realizing what a piece of shit he is all day, starts getting colder and colder. By the end of it, he's basically holding out his fists and yelling "NOOOOOOOOOOO!", like Darth Vader at the end of Revenge of the Sith.

Still, The Swimmer is at least an interesting artifact of its time, and worth noting for that. They don't make movies like it now, and there was really only a brief period where they did.
Posted by Jim at 12:42 PM